Home » The Blog » RECOUP: Reflections accumulating before a performance

What if I told you – my (for now) presumed female reader – that currently there is an island in the north fighting for your right to gush fresh hot geothermal water on your bare breasts and airdry them in the midst of a public pool, just like saggy manboobs on any old Thursday?

Were it not my last name revealing the country I was born in (as you may call me “Ms.-the-daughter-of-her-father”), I could trick you in thinking that I am here making a universal claim, rather than a provocation with a hint of cynicism typical to the cold and dark north. Though – as with many tongue-in-cheek utterances – behind this one lies a feeling of urgency: a longing for feminism to find a strategic path for real transformations.

The most recent representation of feminism in Iceland is the “Free the Nipple” movement, now occurring annually in a festive mode – this year in a local public swimming pool. Baring breasts in public space has a particular history in Iceland, where women used to sun-bathe topless. However, the Free the Nipple movement does not find its origins here, but rather in Iceland’s big other brother, the USA. Feminists in Iceland ride the Free the Nipple wave in the belief that society has become engulfed by pornography. Women do not have the prerogative to decide on their own terms when their bodies are being viewed as sexual or not, especially not on Facebook, let alone in the swimming pool. The Free the Nipple movement shames capitalism – while selling a T-Shirt online with real-life sized white breasts and nipples censored with a black X. 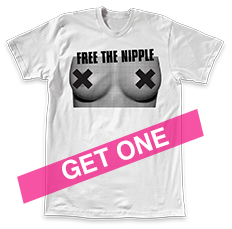 At the center of global economic integration and modernization is the women’s body and her labor, as stated by Meredith Tax in A Road Unforeseen: Women Fight the Islamic State (1). Tax writes of the Kurdish fighter movement, which makes the demands of women central to their movement and thus, according to Tax, presents a possibility for real transformation. Most often represented in the media as bad-ass women with rifles fighting ISIS, the movement is in reality based on an extensive ideology of equality built on a bottom-up model for democratic statelessness.

I mention easy breezy breasts in swimming pools not in order to solemnly shame Western feminism, but rather to see how the localization of that movement manifests a commonality among women and a strategic position for real transformation to unfold. Recently, the public swimming pool has become a territory for biopolitical struggle. Western national fundamentalists view it as a space where the purity of women must be sheltered from the eyes of the other – that is, of single men of refugee status. Further coercion of women’s bodies in public cooling areas can be found in the disputed territory currently unfolding around the “bikini vs. burkini” conundrum. Between the bare breasts and rifles lies an in-between that is not defined by the program set up in the phallologocentric format, but rather, gives way to a negotiated space where alternative female subjective positions might destabilize dogmatic, hegemonic, and exclusionary powers.

Rosi Braidotti makes a premise for redesigning subjectivity as a process of “becoming nomad”. This involves a politically invested cartography of the present condition of mobility in a globalized world: a mapping of a situated, embedded and embodied social position. Nomadic subjectivity thus becomes a way to provoke and sustain “a critique of dominant visions of the subject, identity and knowledge, from within one of the many “centers” that structure the contemporary globalized world” (2). A nomadic cartography of the international art scenic Berlin is also tied to a decentralized roaming between project spaces, platforms and venues. This year’s Project Festival, with an invented Center of Minimum Distances calculated between project spaces, deals with this decentralization as a reality, a Stella scream in an empty lot for a space where decentered paths might still cross-cross. After performing in a project space shortly I first arrived in the city, a man of Kurdish origin approached me. He was stunned to see a woman perform, as this was not allowed in his home country. Some years later our paths crossed again on the lines of a more positive sexual difference. I joined him in his performance, which entailed singing a hymn for his sister, hopefully soon to arrive safely in Berlin – where she is now, she is not allowed to sing because of her gender. 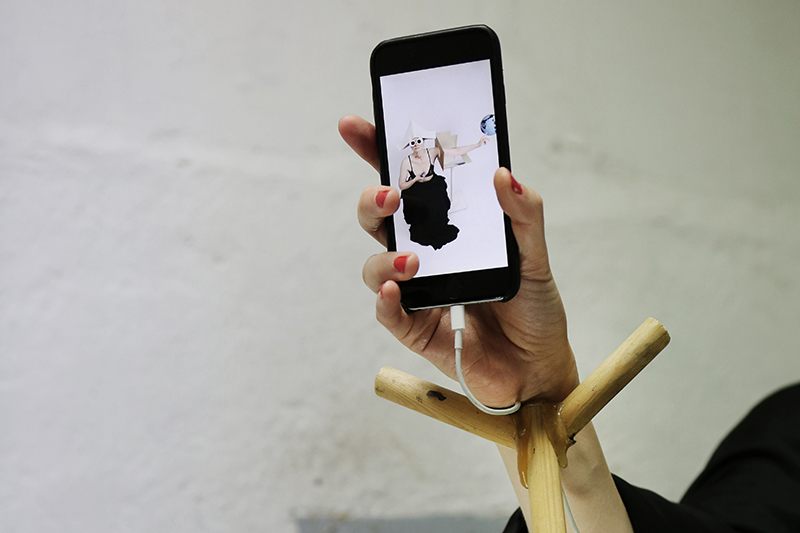 During that same period, my performance for the Project Space Festival and the launch of a publication for THE MANY HEADED HYDRA was taking shape. In my performance, I deployed a personification of Iceland’s nationality, the pure “Mountain Woman”, progressively transforming her by singing the song of the mountain women from the Kurdish freedom movement. This performance became a way for me to put forward a nomadic subjective position as a transformative tool. The Mountain Woman of my performance was a transversed Quota Queen, a former performance-self of mine closely tied to Icelandic neocolonial narratives. A political subjectivity, the Mountain Woman held an i-Phone displaying a video in which my identity collided with that of Erdogan during the coup on FaceTime. This allowed links and tensions between politics and a sense of self to form in a recoup of the female feminist subject while singing a song bound to statelessness.

All the while, erect vertical structures are ever-lingering, such as the GDR tower where the event took place in Berlin and the checkpoint patrol that will be the next stop of the collaboration between the MANY HEADED HYDRA publication Sea Body Infrastructure Image and the Occupational Hazard project in Iceland this fall. During the performance, a part of my costume became a deflated phallus, apparently unnerving male audiences who informed me during a break that they knew of a solution to fix this. Like my women of commonality, whether your weapon is the unhinging of bras or loading arms, there is a common open call for unfixing and unhinging and letting gravity take over.

Bryndís Björnsdóttir is an artist and writer living and working in Berlin. Her performance Mountain Woman – Tunes to FaceTime occurred on Day 14 of the Project Space Festival as a part of DISTRICT’s presentation THE MANY HEADED HYDRA at the Grenzwachturm in Treptow, which also included Ato Malinda’s work On Fait Ensemble and the publication Sea Body Infrastructure Image, with contributions from Anna Hallin & Olga Bergmann, Bryndís Björnsdóttir, Hannah Black, Natasha Ginwala, Tinna Grétarsdóttir, Emma Haugh, Suza Husse, the Occupational Hazard Project, Tejal Shah, Elsa Westreicher, Nine Eglatine Yamamoto-Masson and participants of the workshops “Speaking As Fishes” in Leipzig and Reykjavik.