By info@projectspacefestival-berlin.com August 8, 2016 WHAT IS A PROJECT SPACE No Comments
1

Apartman Projesi or Apartment Project is a street-level space in the heart of Neukölln. It was also the first project space to open in Istanbul, initiated by Selda Asal in 1999. WHO KNOWS WHERE WE ARE is the name of its most recent collaborative project, in which artists Borga Kantürk, Evrim Kavcar, Gökce Süvari, Gümüs Özdes, Merve Ünsal and Sevgi Ortac lived together with Selda Asal for one turbulent month.
Selda Asal explains the background of Apartman Projesi and the process of the current project, titled Mist: low visibility and high presence, which will continue in two further phases of communal living in November 2016 and May 2017.

Merve Ünsal, Short, unpolished, and hard-to-classify lecture-performance, 2016. The lecture-performance is a part of a series of talks Merve does at exhibitions or sites of collaborations in which she tries to reconsider her position as an image-maker in the ever-changing world of representation and presentation. Photo: Berk Asal

PSF: How would you define the project space?
SA: A project space must be a platform that provides artists with a location where they can spend time, do research, experiment, and produce—especially collaborative projects.
Project spaces also need to be able to relate to the passers-by, appealing to people from different backgrounds and professions. Project spaces need to be able to interact with the public. It is possible to do exchange projects with other collectives, working on different production models. Project spaces need to take on things that other art institutions do not.
So this is how we function. The space is street level and we have four large windows. We are able to project films onto the windows, forcing the passers-by to somehow interact with the works. A lot of people from the neighborhood are quite hesitant to enter the space.
Apartman Projesi Berlin is different from Apartman Projesi Istanbul – the projects here are based more on communal living and producing together. It is important not to have an annual program and not to be fully institutionalized. Apartman Projesi does not have a weekly screening or openings on a certain day of the month.
The most defining aspects of Apartman Projesi are a process based on communal living and the fact that most of the projects question and analyze the nature of “today.”

PSF: Apartment Project started out in Istanbul. What was the reason for starting the space?
SA: In order to talk about why Apartman Projesi was initiated, it is important to know about the Istanbul of the 90s. It was a period in time when a lot of people worked with producers from different disciplines, leading to very fruitful discussions. Actors, musicians, writers, philosophers, and journalists were coming together and spending time together as a common, daily thing.At the time, there weren’t many alternative spaces. There were two not-for-profit spaces and then there were the exhibitions at the Ataturk Cultural Center (AKM). There weren’t any other spaces where young artists could open exhibitions.
In 1998, when both spaces were closed and the AKM became a space that could only be rented out, all of the young artists suddenly had nowhere to go. I was thinking of creating a space where everybody could come together. I decided to just get started and opened up the first artist-run space in Turkey in 1999.

PSF: Did you have the sense back then that you were bringing together people from the scene only? Or were you also reaching a public outside of that?
SA: It’s like anywhere else. If you are doing good things, then you create your public. You don’t need to work for your public. People will pass on the news, from one to the other, if you have something to say – that’s important. You do need some kind of structure, though.
Up until 2008, we didn’t have any funding – everybody was doing it for free. But when Turkey became a part of the Schengen zone, we got money from the European Union. We started to work with neighboring countries – in Georgia, Armenia, Azerbaijan, Iran, Bulgaria – countries with which we share a history due to the Ottoman Empire: common roots, songs, stories, the way that we cook, drink, dance. It was up to the participating artists to connect with artists from these regions in their own way. Our mobile project was based on these cultural entanglements.

PSF: And what was your reason for moving to Berlin?
SA: Actually I couldn’t name one specific reason: But the situations in Turkey were in constant flux. Especially in cultural politics there were serious changes. In 2012 I made the decision to begin shuttling back and forth. In 2011, the Minister for the Interior proclaimed that Turkey would begin following artists’ activities in order to track down the terrorists. At that point the authorities began to monitor all the theater people. They described actors as people who drink on the corner at the bar, who don’t work, who squander their wages. Actors were considered to be terrorizing the system. That was the logic behind it.
I thought, well, it’s probably going to get pretty boring here soon. I learnt German as a second foreign language in high school, in Izmir. I was doing a lot of projects and exhibitions in Germany. I thought Germany was a good place to spend some time. I thought, let’s see how it goes, to put one leg here and one leg there. But it was very hard to leave. In Istanbul there is a very dynamic art scene. So at that stage, I didn’t plan to move here long-term. One year passed and then the Gezi demonstrations happened. I was in Berlin, but I packed my bags and went back to demonstrate, to keep our spirit going. It was a very special time. Everybody brought food and helped one another. It was a nice moment because Istanbul is a segregated city, where the segments of society don’t usually merge. But for Gezi, we came together. The fascists and the communists, the Kemalists, and the Kurdish people, the radical Islamicists who were in opposition to Erdogan – we were all together. We were very strong and we had hope. But after the elections of March and the new legislations, we were limited, we lost hope, we became introverted, we became more quiet. In the following period, I organized an exhibition project titled Stay with me as a way to keep a record. It was about restoring hope from a specific point in time. I asked artists that I encountered during the Gezi process whether they kept notes or sketches of the situation. When I learned that they did, I started to accumulate the notebooks and I asked them to invite other artists who kept notebooks. This is how the exhibition “stay with me” was formed. It is an exhibition of 84 sketch books. The exhibition first opened in Berlin, then in Istanbul. Iver Ohm from The Hidden Institute was interested in the exhibition when it was in Berlin, triggering collaborations in Bremen and Hamburg. 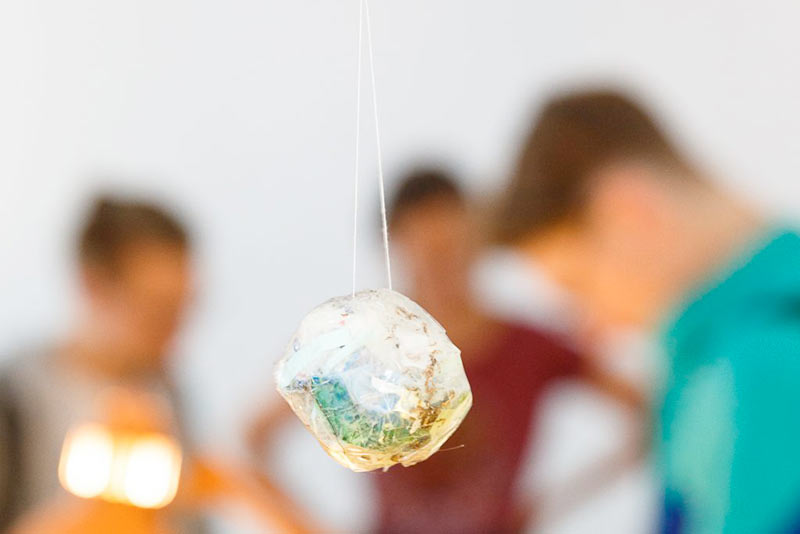 PSF: What is the “low visibility” of your current year-long program Mist: low visibility and high presence about?
SA: After Stay with me I changed my direction. The political agenda in Turkey was shifting so rapidly. Last year, I spoke to one of the artists about changing our methodology so that it would possible to be more responsive to this state. I decided to use the idea of “translation” as a methodology. That’s also we chose this name – mist, fog – because I want to show what we don’t see. Politically, everything is unclear. This means that the mode of making and showing must also be filtered with a different kind of methodology, a translation from one person to the next, and onwards.
So before the exhibition WHO KNOWS WHERE WE ARE, seven of us lived and worked here for one month together. In November we will have another month of isolation together – the same group, with three or four more people. After the second isolation period of working together, we will have a third one in May, when we construct an exhibition and invite all the artists who we need to explain our positions. Each of us can then invite other artists. For instance, if someone is working on the topic of violence, she should invite other artists who are also working with the same theme, but from a different angle, to make things less clear.

PSF: How did the artists come together here in Berlin?
SA: I invited one artist, and together we decided about the third person. We became three. Then the three of us decided about the fourth person. And so on, until we were seven. Step by step. We always discussed carefully who should join us. I thought we needed some way of translating the work, together, as a group.

PSF: When you use the word “mist”, are you talking about mist as a political strategy? Because you can also hide yourself, in mist. This links in to the mode of exile – of doing something in exile because it’s not possible at home.
SA: You could think of this as a strategy or not. The answer to this question has to be complicated, because the situation itself is complicated. A lot of people born in Turkey have witnessed a military coup d’etat, or more. The young artists listened to their parents about it, people of my generation experienced it themselves. To be self-protective became a reflex. This is a period of time when we are not able to articulate clearly what is going on. The artists participating in this project will have to say what they want to say indirectly. Just like a fog. Your movements slow down when you are in the fog, this is exactly the same thing. This project will also reflect this state of not being able to move, focusing on the notion of translation.

PSF: What was a typical day in your group process?
SA: Everyone woke up around 9:30-10:30. I was always the last one to sleep and the earliest to wake up. We would have porridge and coffee altogether. Then, we would have a short meeting, and everybody would go to work for their research, exploring the city according to their research or in the space. We cooked all our meals together and also tried to watch films on the projector when we could. Some of us shared their music, we would take breaks to do errands, to walk, to read.

PSF: The video was projected onto the window, so the window became intransparent, as well.
SA: The looped film was a way to deal with the ideas discussed above. It’s about writing in air: a form of illegibility. 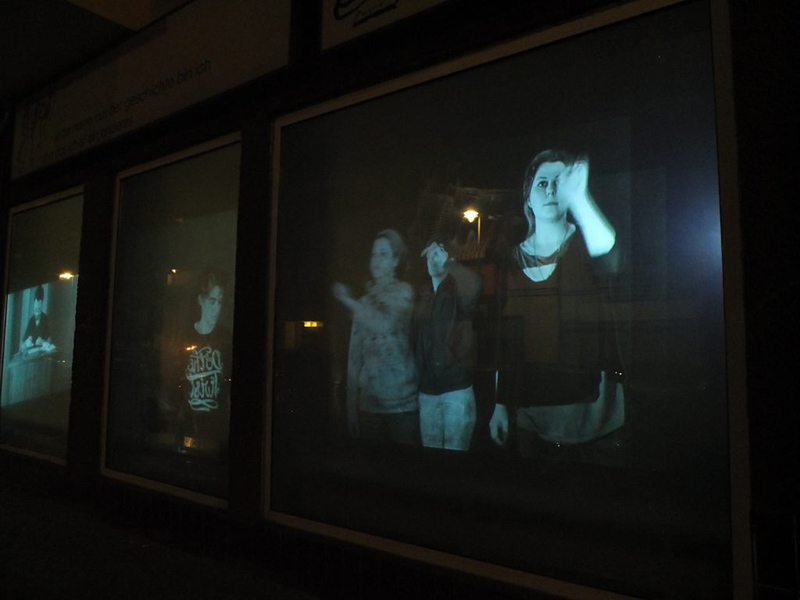