By info@projectspacefestival-berlin.com August 13, 2018 Uncategorized No Comments
1 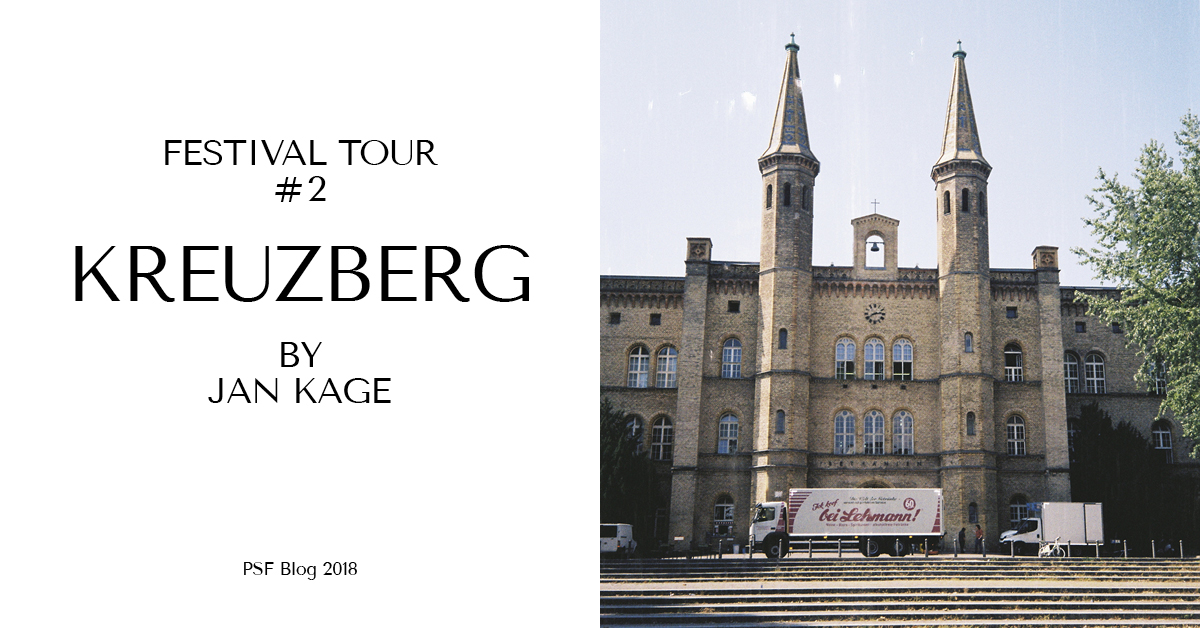 The Project Space Festival is also a tour through the city. Curator and journalist Jan Kage takes us on a stroll through Kreuzberg, where the festival contribution of his project space SCHAU FENSTER opens on August 15th. How is it to live in Kunstraum Kreuzberg – and where can discoveries still be made? A day in Kreuzberg.

Kunstraum Kreuzberg
“Coming to Berlin in 1997 from the Rhineland region, the band Ton Steine Scherben were gods for me: “Der Mariannenplatz war blau, so viele Bullen waren da.“ (eng: “There were so many cops, Mariannenplatz was blue.”) For a teenager looking at Berlin in a rather romantic way, Mariannenplatz, with its iconic Bethanien building, was an incredibly charged place.

I first came across the Kunstraum Kreuzberg in Bethanien fifteen years ago, when Adrian Nabi curated the important exhibition Backjumps – The Live Issue there. That was when urban art – or ‘street art’ as it was called back then – was still fresh, before everyone was copying Banksy, or Swoon. In 2012, I curated an exhibition there myself, a retrospective to mark the ninth anniversary of my party series PARTY ARTY: seven weeks, and over fifty artists. To reflect the eclectic breadth of the artistic positions, I even built my own apartment into the exhibition, complete with bed, kitchen table, fridge and my drum kit – even my girlfriend moved in with me there. Friends stopped by, we drank, ate, jammed… I really lived there. That’s why I have quite a personal relationship to the place.

Municipal galleries often have the reputation of being a bit stuffy. Not the Kunstraum. Thanks to people like its director Stéphane Bauer, it has stayed close to its roots, without becoming outdated.” 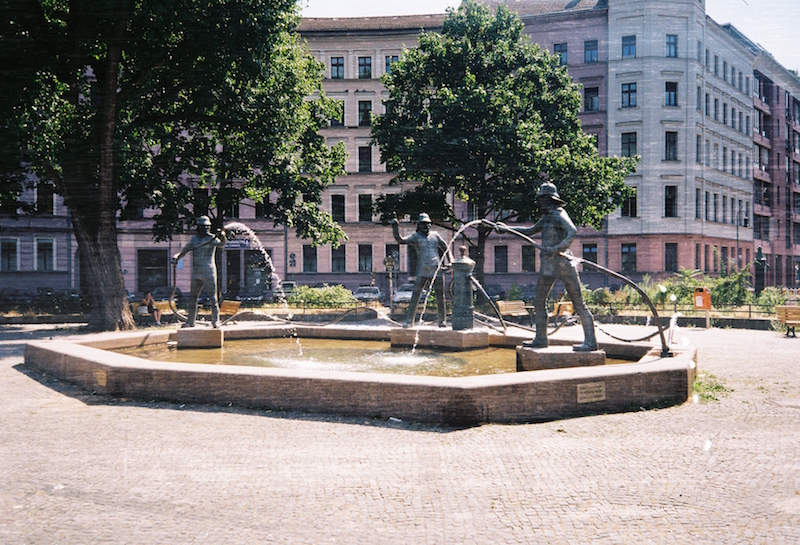 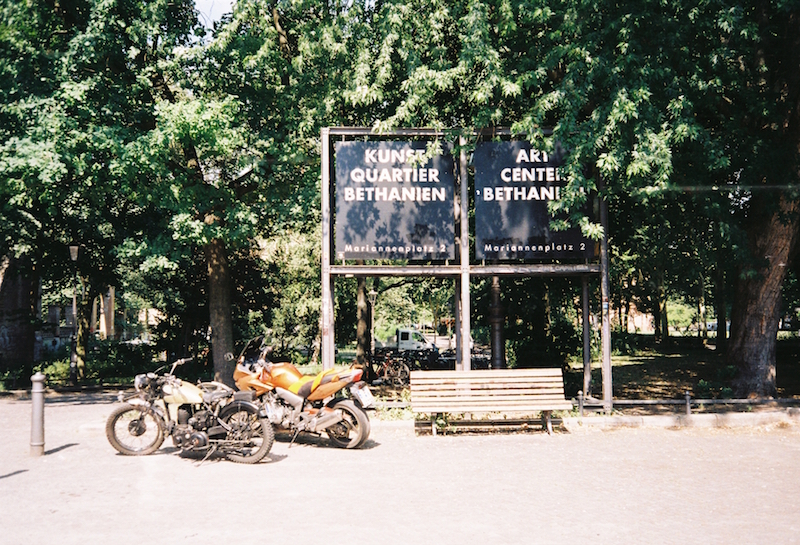 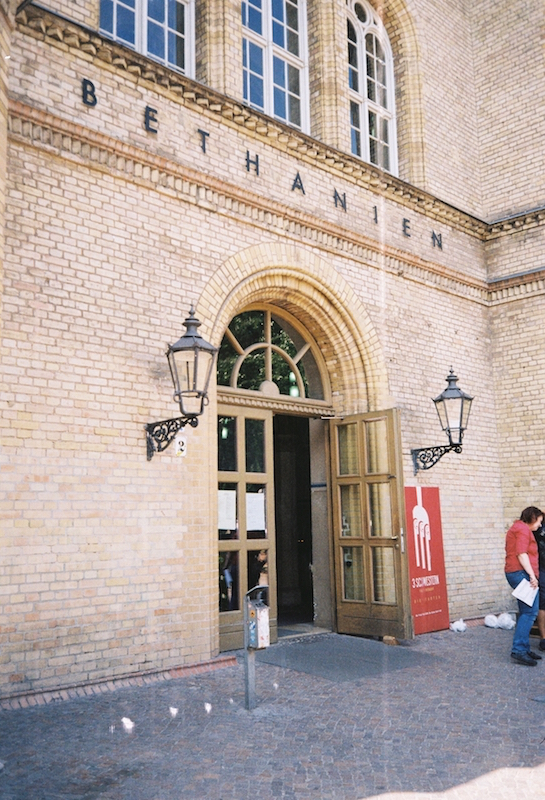 3 Schwestern
“When I was living at Kunstraum Kreuzberg, I wanted to just walk over to 3 Schwestern every morning in my bathrobe to have breakfast. But the journey through the endless corridors was just a bit too long for my taste. Luckily, if I was fully dressed, I was allowed to eat with an employee discount. 3 Schwestern does German cuisine, and is run by two good-looking Berlin rock ‘n’ roll guys: Wolfgang and Michael. I’ve travelled through Germany as a tour manager a lot, and you come to all these mid-sized towns where you go to the Italian place or the Chinese place, and the Pizza Margherita always tastes the same, the number 17 on the menu is, well, the number 17. And all of this is true for Berlin as well. But! The Fränkische Sauerbraten is different from the Rheinische Sauerbraten, and the people over at 3 Schwestern care about those differences. Besides, where can you eat a good tripe soup in Berlin? That’s the sort of thing you can find at 3 Schwestern. German cuisine, pretty laid back.” 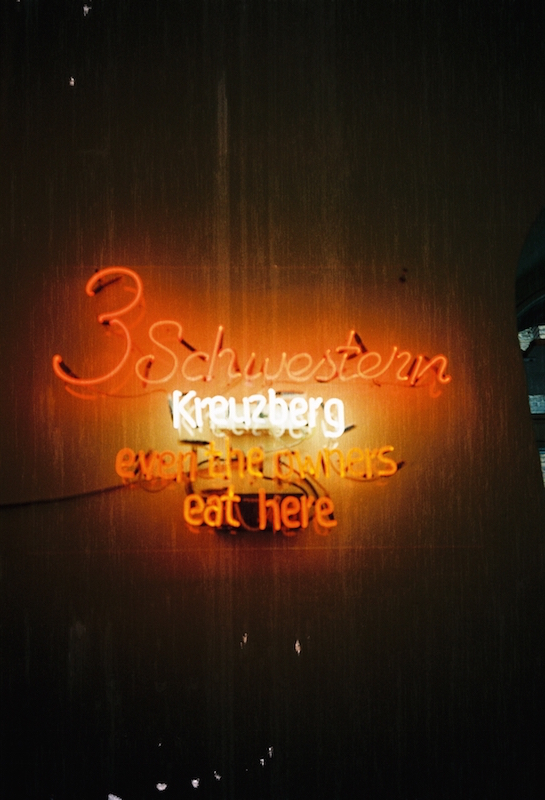 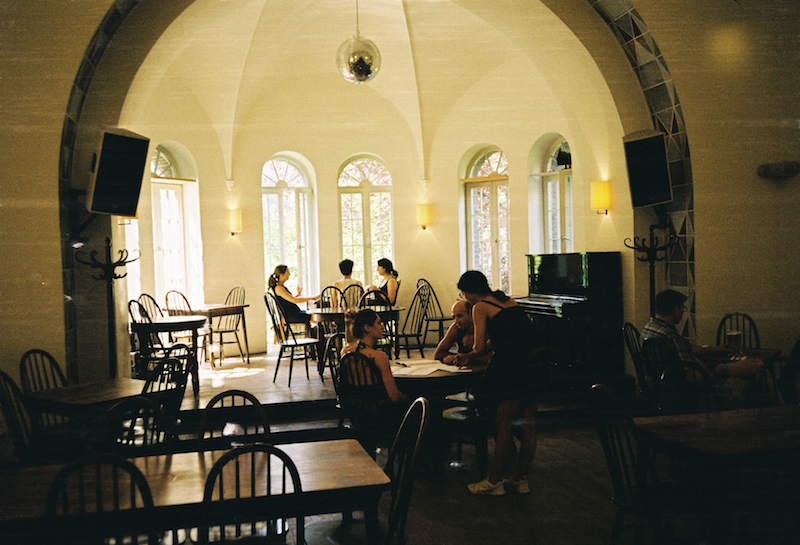 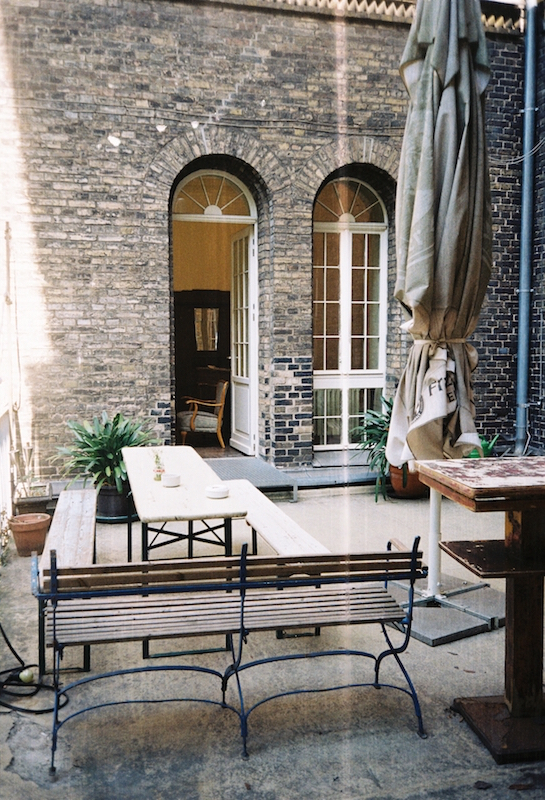 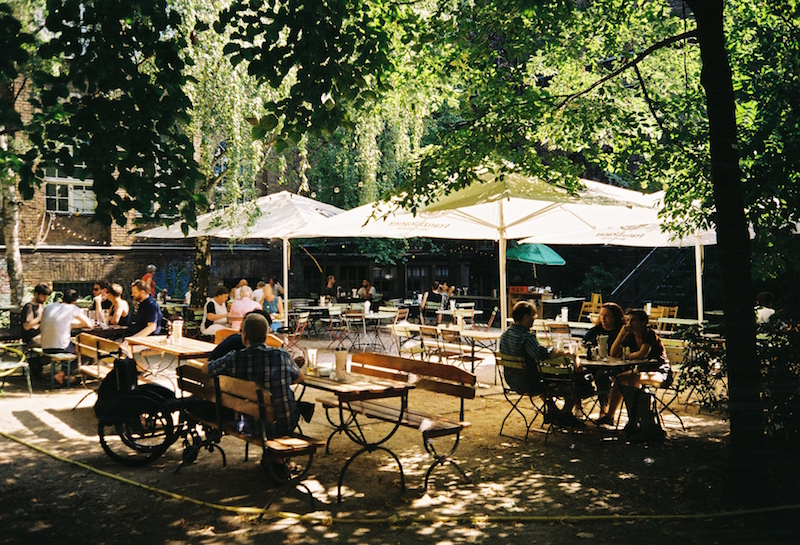 Kwadrat
“Kwadrat is run by my friend Martin Kwade. When you see Martin, you always wonder why he isn’t the artist, all neurotic, chain-smoking, and all hyped-up. He ran the Artist Night over at King Size Bar for many years, and created some wonderful evenings there. His exhibitions are special, because he really digs in as a one-person enterprise. Martin always goes to great lengths to create something distinct. I remember once in his old space, he had a piece by Awst & Walther where they installed long pipes, for which they had to cut huge holes into the walls. Incredible. Running at a hundred miles per hour, and always getting people excited with him. At the moment, he is showing Wolfgang Lugmair, who painted the entire outside wall.” 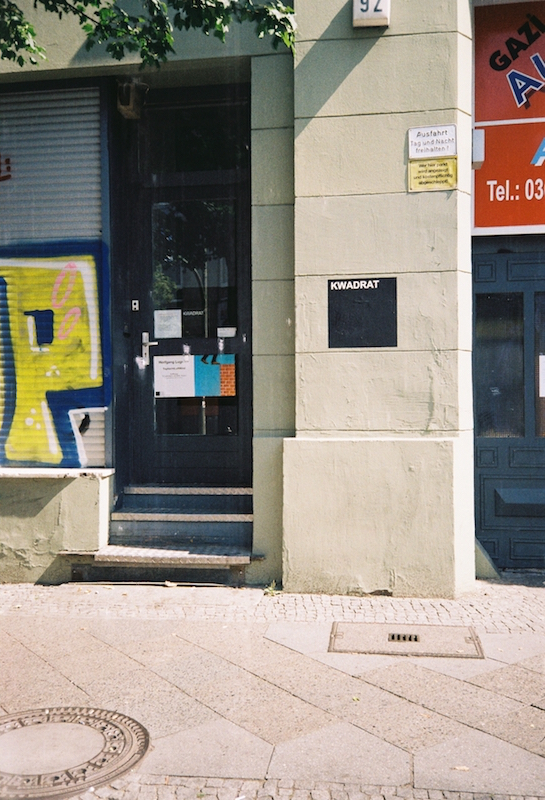 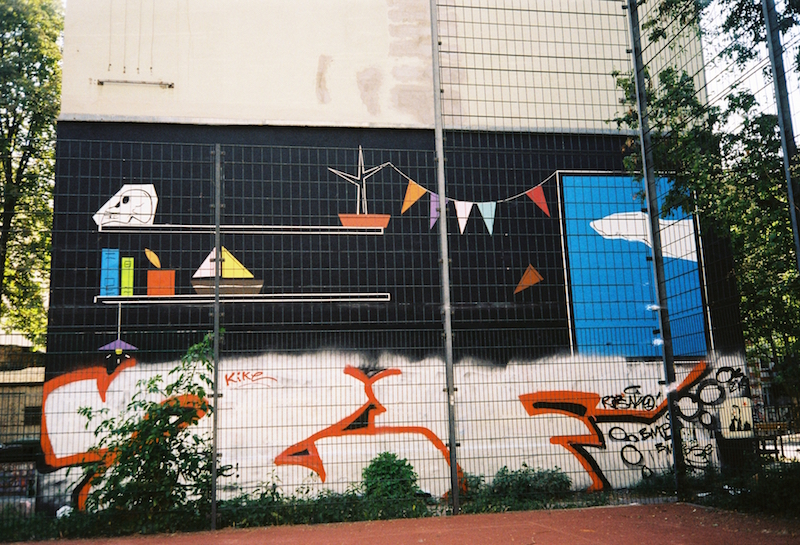 b_books
“Besides Kisch & Co on Oranienstraße, b_books is my favourite bookstore. I don’t order my books on the Internet, I just go to a bookstore. They too will get you your book the next day. And you forget how important it is to be inspired while just browsing – it’s a totally different form of discovery. At b_books, you can wildly flick through all the books there, and get really good tips from the staff as well. It’s small, but heavy on discourse, run by intellectuals like Katja Diefenbach. For over 20 years, they have fostered a great programme, ranging from art, to science, to just normal literature. The store is to Kreuzberg what Pro qm is to Mitte: pretty much indispensable.” 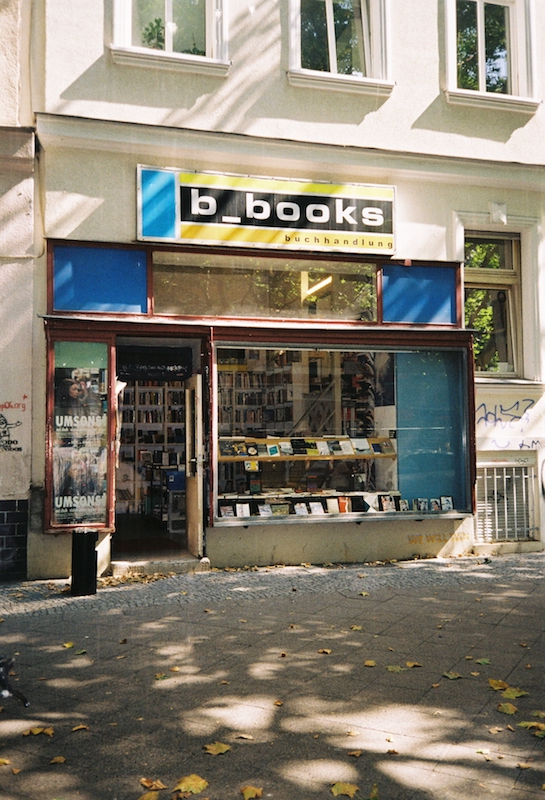 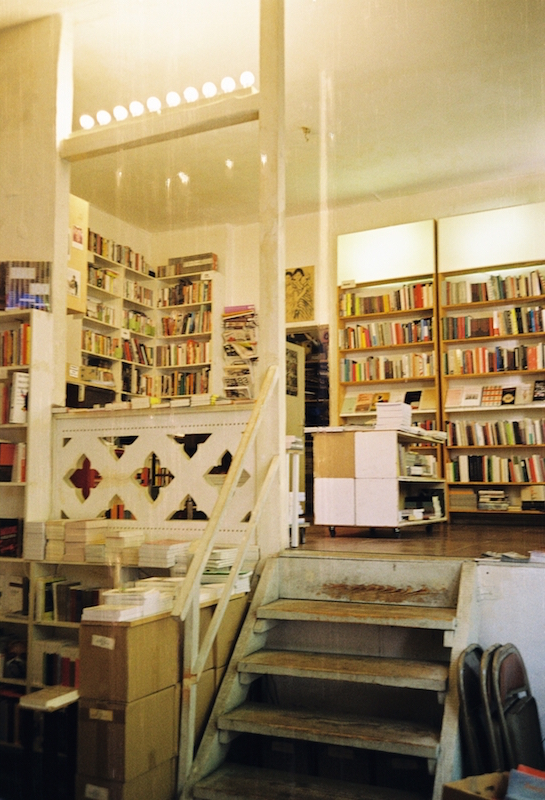