By info@projectspacefestival-berlin.com August 31, 2018 Uncategorized No Comments
1

Home » The Blog » STRONGER TOGETHER 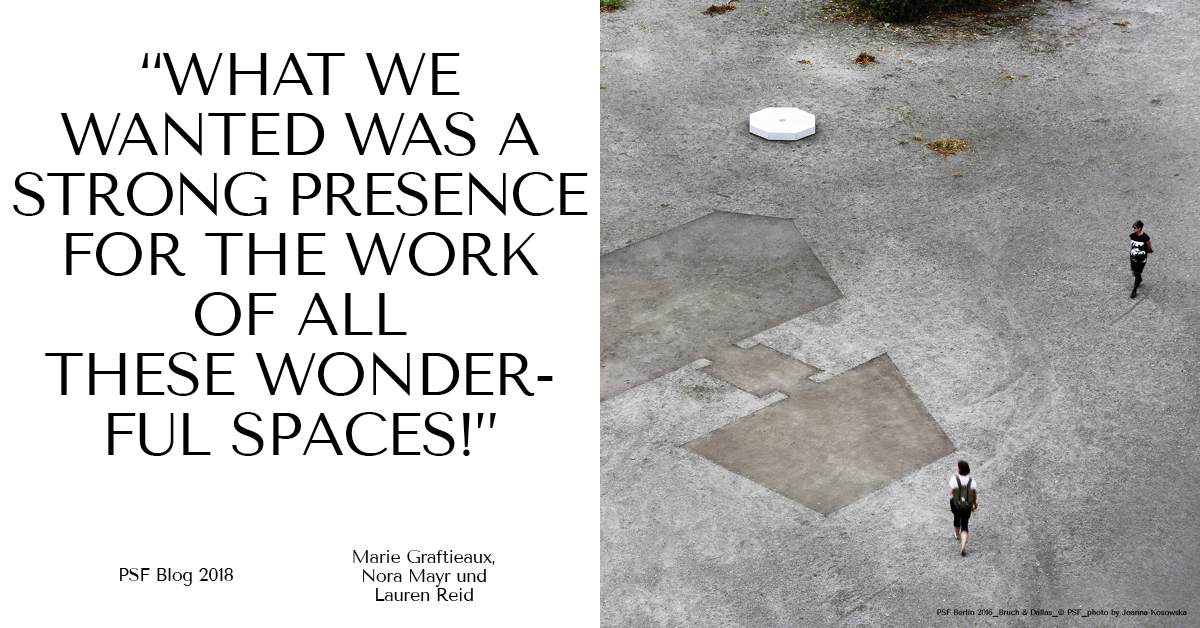 Four years ago, Marie Graftieaux, Nora Mayr, and Lauren Reid founded Project Space Festival Berlin. Here, they are giving an insight into what motivated them, and what they hope the festival’s future might bring.

“When we started the festival in 2014, it was mainly because we wanted to have closer contact with the other spaces in the city. By that time, we had already had our own space insitu for a year, and felt that there was too little connection with our colleagues. It’s often the case that your own space takes up a lot of time and energy – and that’s on top of your day job. There’s just not enough time to see the exhibitions and events of the others. So our desire was to help building a stronger network, and a closeness between the people running all these spaces. Our objective was that the spaces would feel a little less like lone warriors, and instead recognised as part of an important group of cultural producers.

The beautiful thing about the beginning was the enthusiasm, and the way in which all participants were invested in creating something meaningful – out of nothing basically. The first two years, we had to make it without any financial help from outside the scene itself. That the festival can now rely on funding is an important step in the direction of the acknowledgement of the festival’s principal idea, and the work of all its participants.

We are always glad to see new spaces in the program, and this year’s festival is no exception, with a couple of newcomers. It’s one of the ways in which the festival hints at the diversity that is encapsulated within the term “project space”. For us, it was important to be able to reflect the myriad of approaches through the festival, as well as the constant changes within the scene. That’s also why we always knew that it should not be run just by a small group of people – us founders, in this case. The different artistic directors have since inscribed this idea of diversity deeply into the structure of the festival. We hope that it will hold on to its initial enthusiasm and spirit of optimism. Maybe every year of the festival should somehow be like an exciting new start.

It’s with so much joy that we have seen the festival establish itself and grow in visibility – not just among the audience, but also in politics and other cultural institutions of the city. Before we had initiated the festival, we always felt a little like our work was only seen by a (much too small) group of insiders. Yet, what we wanted was a broad audience, and a strong presence for the work of all these wonderful spaces! That’s something that the festival has achieved. Even international visitors write to us, again and again, that the festival has helped them getting an overview on this important part of Berlin’s cultural world. That’s something that makes us really happy.

We hope that the festival will remain a vital part of Berlin’s cultural calendar in the future, and that it develops new partnerships with other institutions – and, also, that it will continue to meet with a wide response, even internationally. Finally, it would be great to see the festival maintain its open and experimental approach over the next years.

We’ll see you next year!”