I. Center and Periphery
Center and periphery are spatial concepts that, following Henri Lefebvre, resonate in three distinct yet interrelated registers: physical space, represented space, and representational space (1). Considering the periphery, or margin, as a necessary and constituent part of the center, without which the center could not exist, this text will discuss Lefebvre’s “spatial triad” in relation to the project space:

First, in spatial practice, or physical space, the material conditions of society come to the fore. Spatial practice is space that is perceived, constantly undergoing interpretation and transformation by society. Second, representations of space are formalized conceptions of space. Organized by scientists, planners, urbanists and (social) engineers, these spaces tend towards systems of verbal signs. Third and finally, representational space is space as directly lived through its complex symbolisms: the dominated space “which the imagination seeks to change and appropriate. It overlays physical space, making symbolic use of its objects” (2). This is a space of dissensus that challenges hegemony.

As a part of physical space, the project space naturally belongs to the field of spatial practice: It is animated by human beings at the point where center and periphery meet. Now, how can we understand representations of space (e.g. urban legislation and zoning codes) and representational space (the space where ideals and social movements form) in relation to the project space? 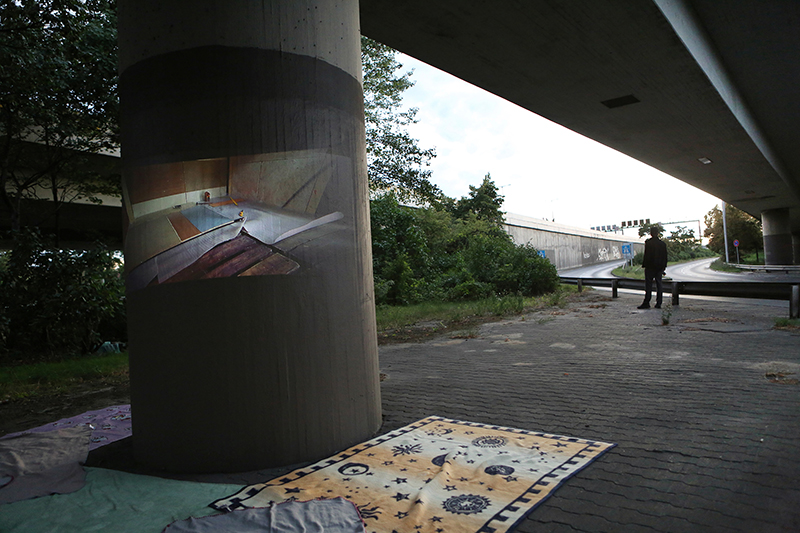 II. Expulsions
What we commonly refer to as gentrification, a process closely linked to representations of space, is just the tip of the iceberg. As Saskia Sassen recognizes in Expulsions, the extreme complexity of the global economy tends to produce elementary brutalities. Sassen posits the notion of expulsions as an analytical device that “takes us beyond the more familiar idea of growing inequality as a way of capturing the pathologies of today’s global capitalism” (3).

If we site gentrification purely within spatial practice, we might tend to believe that artists and other “creatives” are among the first culprits causing rent increases and the homogenization of urban centers. But if we take a closer look at the global economy, to which all real estate is subject in one way or another, we find that expulsions from the center to the periphery are symptoms of something else entirely. Even though newcomer artists and young professionals do create hype in certain neighborhoods, the expulsion of longtime residents is a result of (international) property speculation and its subsequent utility as a tradable asset for securitizing debt — financial capitalism.

Let’s consider the global economy as a system of representations of space. As abstract representations of physical space, asset-backed securities (such as home mortgages), certain futures contracts (think of agricultural futures like grains and meats), and other derivative products all exist as speculative representations of space that indeed transform our material reality. Their legality is subject to legislation, often based on a global consensus.

One of the most palpable examples of these transformations arose in the wake of the subprime mortgage crisis, as families were forced out of their homes subsequent to defaulting on their loans. Another example can be found in globalized cities: across the world, people are being pushed out of urban centers, including in Berlin, to make way for luxury property developments traded like currency on the global real estate market.

Even the project space cannot withstand inevitable expulsion from the center unless it actively participates within the organizing structures which represent the phyical space it inhabits. Actually, it is important to note that the project space as a program is often already excluded from representation, because sincere curating — a practice whose name originates from the Latin curare, to cure — is, like all care work (including maintenance), seriously underrepresented in the capitalist economy.

III. Projecting Space
Moving on to the third space, representational space (space as directly lived, or “lived space”), we see that it has, on a global scale, become subordinate to the global economy’s system of verbal signs. Yet representational spaces, while dominated, are the imagination’s object: they tend towards nonverbal systems. Several projects in this year’s Project Space Festival have opened up representational spaces while occupying the physical residue of spatial representations (infrastructure space, wastelands) — areas where the center and the periphery bleed into each other.

TOKONOMA’s intervention Home Coming Parade took place in a space never intended for humans to linger: an underpass of the A100 autobahn. The freeway divides Berlin’s center from peripheral neighborhoods, and its controversial expansion is set to continue displacing communities. The collective served soup and projected a video documenting life in the Cuvrybrache squat, a former home to around 150 people in Kreuzberg, which after formal attempts to expel its inhabitants mysteriously burned to the ground in 2014. A poetic Wi-Fi installation visible to visitors with compliant devices hosted a descriptive text about a seemingly utopian space in Greece involving artists and philosophers — and it extended an invitation to visit. Occupying a threshold to the periphery, the intervention projected alternative spaces of inhabitation that go beyond established conceptions of home.

Alex Head and Anna Kostreva’s geological happening Off the Record took place on a wasteland north of Nollendorfplatz, an area of Berlin notorious for its prostitution. The wasteland, filled with rubble and flattened out after WWII, eventually became a used car dealership before being abandoned to nature — and consequentially to use by local sex workers. Head and Kostreva invited participants in the event curated by Neue Berliner Räume to dig into the city’s historic crust and recover geological (and anthropological) artifacts of interest. Within the space of a day, a variety of significant objects were uncovered that contributed to a narrative about the site pieced together by participants. However, some of the discoveries dug up were as alien as the rocks transported to the site by glaciers millions of years ago. Verbal narratives were exposed as inadequate, as were visual ones: the artist requested a 15 year delayed release of all photographic documentation, resulting in an alternate form of documentation by Festival photographer Joanna Kosowska. Lived space was liberated from its direct representations.

If finally, to make a play on words, we could call representations of space instead projected space (space that is projected), then perhaps we could call representational space instead projecting space — space which itself projects. The project space (in physical space) is a contested zone, always already positioned between center and periphery, the thick line where durable operations of making visible and invisible take place. And as a site for the manifestation of representational space, the project space is actively projecting space.

Thinking with Jacques Rancière, we could say that the project space is an opportunity for projecting dissensus. Like the uncounted person who is invisible to political representation, the project space inserts a division in the common sense by “putting two worlds in one and the same world” (4). When the project space materializes in physical space, potential lived alternatives to its dominance by the global economy, political self-understanding becomes a real possibility.

Benjamin T. Busch is currently researching critical modes of architectural production within the field of spatial practice. Treating architecture as a symptom of abstract processes, his artwork and writing investigate complex fields of relations within the built environment.