By info@projectspacefestival-berlin.com August 18, 2018 Uncategorized No Comments
7

Home » The Blog » RIGHT IN THE MIDDLE OF IT ALL 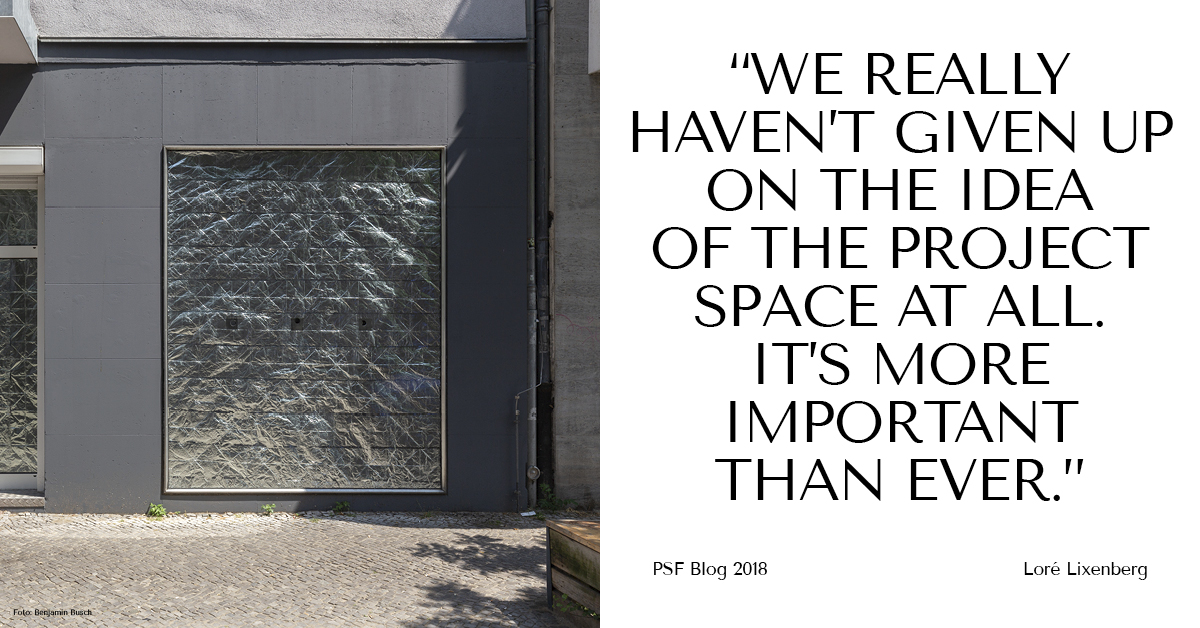 Berlin’s project space scene is constantly changing and shifting. We talk to Benjamin Busch, whose TIER.space just opened recently, and to Loré Lixenberg, who lost her space La Plaque Tournante last year. An interview about the wonder of finding a space, Berlin’s labyrinthine bureaucracy, and refusing to give up.

Benjamin, you opened TIER.space together with Lorenzo Sandoval earlier this year. How did the decision to open the space come about?
Benjamin: Lorenzo and I were talking about finding a space in the neighbourhood in Neukölln for quite some time. And then it kind of happened miraculously that I received an invitation to apply for this subsidised space, offered by the Berlin Senate’s Arbeitsraumprogramm. The whole system behind that seems a bit labyrinthine to me – you’d actually need a diagram to explain it. But the bureaucracy is essentially what created the space and allowed us to move into it, so you can’t be too critical. It’s officially rented by the GSE Gesellschaft für StadtEntwicklung, and then it’s sublet to us. We pay one third of the rent, and the Senate pays the other two thirds. There was a jury process, and it actually all went pretty fast. A week after we applied, we found out that we had gotten the space, and two weeks later, on May 2nd, we signed the contract.

Loré: We applied for the same space, you beat us to that! (laughs). But what a great scheme!

And yet, even with support like that, it still seems a huge responsibility. Why take on the burden of a project space? What drove you to do it?
Loré: For me, it’s not even about motivation. It’s just an amazing thing to do, it’s a necessary thing to do! If you are invested in the dissemination of art, that’s what you have to do. Simple. It’s so great to have an interface between what we do as avant-garde artists and “normal” people. That’s really exciting. And you don’t get that unless you’re at the coalface. When you do your own project space, you are right in the middle of it all.

Benjamin: For me, it’s about the idea of working collectively. So much of the work that we do is collective anyway: whether we are working directly with artists, or writing about them, whether we are cleaning the floor or preparing the Facebook invites, there is something below the surface that connects us all. And I want to foster that kind of energy, discovering new ways of working together, without a sense of competition, of co-creating and co-producing artworks and space without the imperative of building a CV or a certain reputation. And working in this way allows me to recognise the collectivity behind many – if not all – works of art. 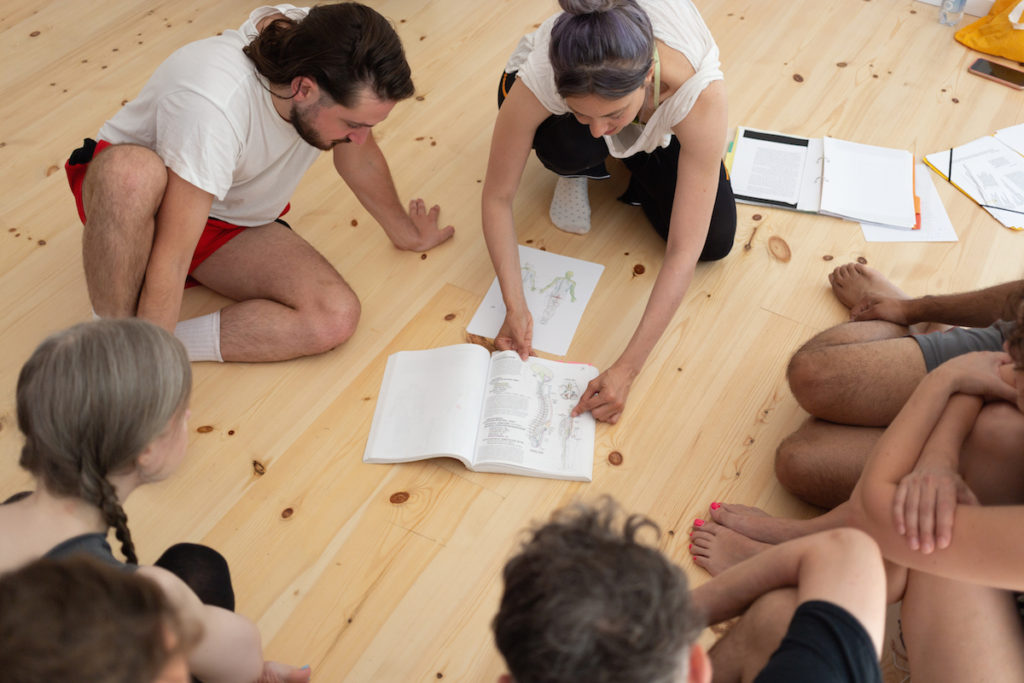 Has there never been a moment when you felt like it was too much to take on next to the day job, your own practice as an artist and everything else?
Benjamin: Of course it’s difficult sometimes, when you are double- and triple-booked and you still have to send out that damn newsletter, and you are just really exhausted. And at this point, it’s hard not to lose track.

Would you say there is enough recognition for the work of running a space then?
Benjamin: Well, just looking at the actions of the Senate, there is some recognition. That’s not to say that there couldn’t be more, either from the Senate or others. But I guess the question is: Who is responsible for rewarding you? For example, I don’t think that an artist you work with in your space is responsible to pay you, because he or she is also putting valuable time, money and energy into the project. I would say there are other interesting ways to remunerate labour without money, based on a community of trust. I’m thinking about tokens, not only cryptocurrency, but more like a simple, self-issued, time-based currency. This is one thing we are beginning to experiment with at TIER.space. So you give your time to the space and you get tokens in return, we’re calling them ‘Tieritos’. Until now, we’re still working out the form they will take. We want them to be useful objects, something more than symbolic notes or bits of code. In the future, you can also use them in exchange for other objects – like publications that we want to produce at the space, so you get something back for your time.

Loré: I don’t really feel any sense of entitlement in general. Just because I decide to run a space, I’m not entitled to some kind of a special treatment or thank-you. I’m from England; I’m used to being shat on from a great height as an artist. I tend to think it’s incredible that we can do what we do at all. No, I simply feel extremely concerned about
the way things are going in Berlin. Finding a space is indeed a bit of a miracle somehow, as Ben mentioned earlier.

Loré, you and your partner Frédéric Acquaviva actually lost your space last year. What happened?
Loré: We had this fabulous Berlin lady, who had rented the space to us for years. You see, back in 2013, it wasn’t easy to open a space but it was possible, just possible. It felt a little bit different back then. When we applied for the space, we didn’t have Schufa this and Schufa that. It wasn’t a thousand people queuing up for it. It was just this old lady that we talked to. And she gave us the space: an old doctors practice with all the equipment still there. It was a mess, but also completely amazing. We used everything what was there, we liked the idea that people would come there and be kind of healed by the avant-garde. Then this arsehole property developer bought it, they basically bought the entire block, renovated it, and put the price up. They have one interest and one interest only: and that is making money. They have no interest in the city itself.

And they wanted you out?
Loré: Yes, I mean we tried, and tried, and tried. Nothing. They wanted us out and that was it. Just three months’ notice. And we had that space for almost five years! If you go past it now, it’s still empty…

Did you try finding another space?
Loré: Yes, but we just never got another space. It wasn’t that we couldn’t afford it as we had just gotten the Senate Project Space Award, but the landlords of the places we viewed were not impressed by that. We went to those strange viewings where loads of people turn up on the same day, each waving their papers. What they wanted were people with regular incomes and ’proper’ jobs. We were rejected by every space we applied for. Or they cost 4000 to 5000 Euros per month – spaces similar to the one we had on Sonnenallee, that’s how much Berlin has changed. We could have afforded that for one year but would have struggled after that.

What would have helped you?
Loré: If there would have been one person that could helped us through the system, who would have gone to those ‘auditions’ with us, someone official who would have vouched for us in some sense. We needed someone, or an institution behind to mediate between us and the landlords, so they weren’t just presented with two wild-eyed feral artists. I think then we might have had success. In this area we really needed some kind of ‘Mentor’. It would have been great if a person like that could have spoken to Akelius who threw us out. Maybe they could have done something. A really nice journalist from FAZ phoned them to try and change their minds but to no avail. I even went to the mayor of Neukölln, and she just smiled, but did nothing really. 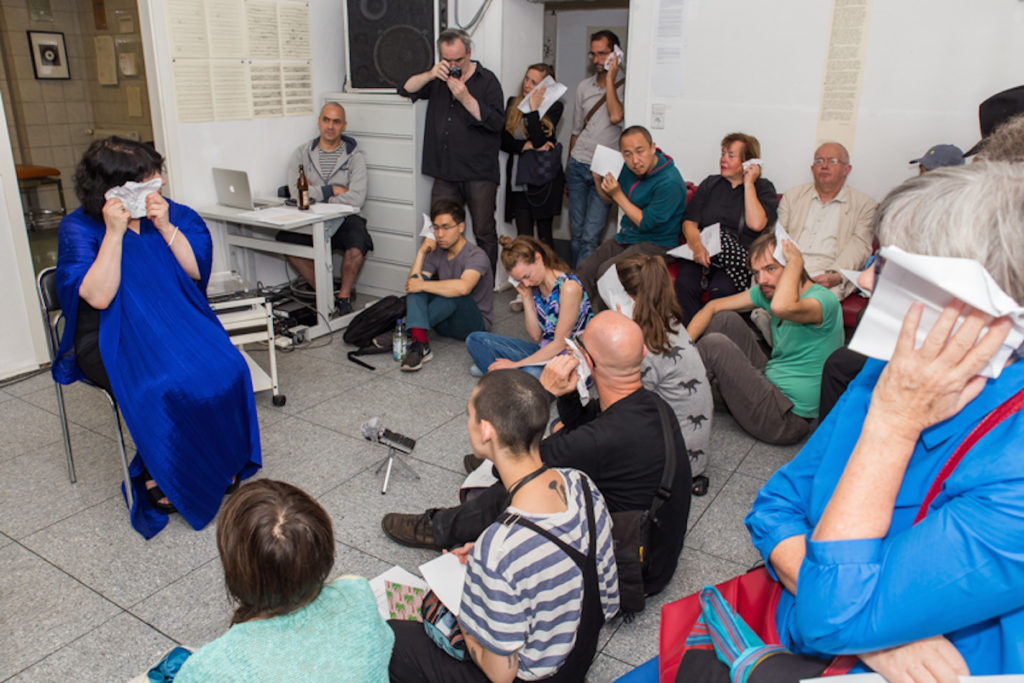 But you haven’t given up. I’m amazed that you kept your optimism. Why start all over again when you had such a disappointment with it all?
Loré: Because we did some incredible work! The only disappointment was that we lost our space but I don’t want to tarnish the whole project with that. So we are coming back in September, presenting CRU 4 at Hamburger Bahnhof, which is the magazine of La Plaque Tournante. And with it, we are going to present the last year of the space. It’s going to be called: What happened or could have happened at La Plaque Tournante. The next issue, CRU 5 , will then be completely virtual: Frédéric took photos of the space and we are going to photoshop the exhibitions into the images. So we really haven’t given up on the idea at all. It’s more important than ever.

Does it need that kind of staunch enthusiasm anyway to undertake such endeavour?
Benjamin: We took a leap of faith, sure. And there’s definitely and intrinsic optimism behind the project. But to be quite honest, we didn’t really have much of a choice, when you think about it. Once we were given the gift of a space, to turn it down would have been a huge error. As it goes with the applications that we are writing day in day out, as artists and curators – you never totally expect that you’ll be granted what you wished for. You do it as a pragmatic, but still almost inconsequential, step in your practice. But when something actually works, then you have to go for it.