Apartman Projesi or Apartment Project is a street-level space in the heart of Neukölln. It was also the first project space to open in Istanbul, initiated by Selda Asal in 1999. WHO KNOWS WHERE WE ARE is the name of its most recent collaborative project, in which artists Borga Kantürk, Evrim Kavcar, Gökce Süvari, Gümüs Özdes, Merve Ünsal and Sevgi Ortac lived together with Selda Asal for one turbulent month. Selda Asal explains the background of Apartman Projesi and the process of the current project, titled Mist: low visibility and high presence, which will continue in two further phases of communal living in November 2016 and May 2017. END_OF_DOCUMENT_TOKEN_TO_BE_REPLACED

By info@projectspacefestival-berlin.com | AFFECTIVE ALTRUISM | No Comments 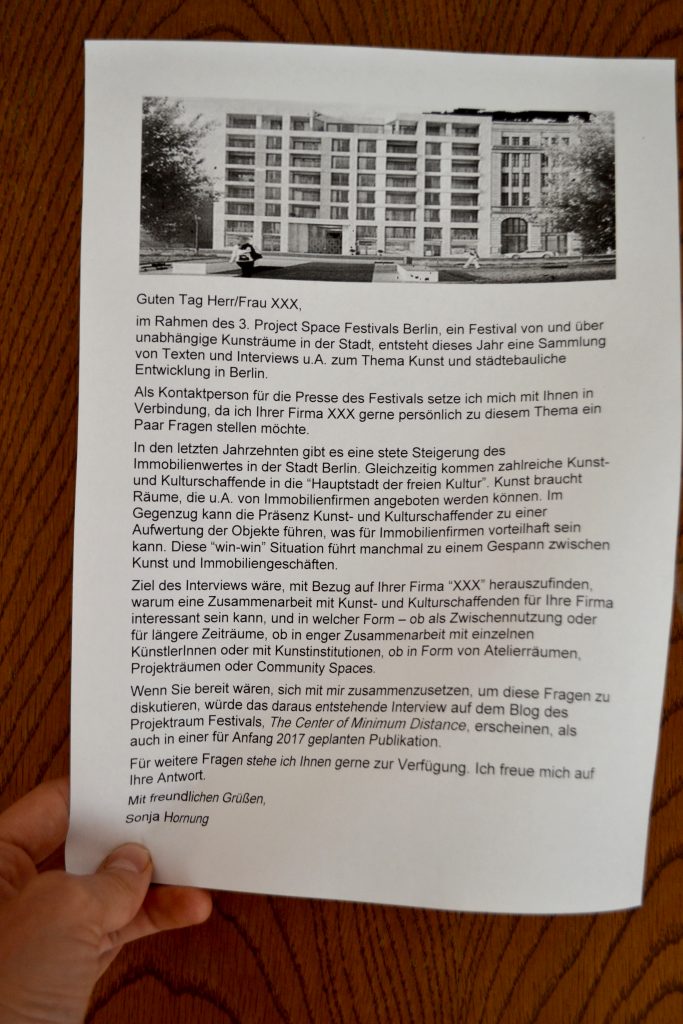 The results of this experiment can be found here: http://kubaparis.com/the-difference-sonja-hornung-berlin-2017/

ALL PERIPHERIES ARE CENTERS

This festival opens at the calculated geographical center of all of this year’s applicants for the Project Space Festival – a place given the title The Center of Minimum Distance. This blog, which shares the same name, opens with an attempt to address the question of the peripheral.

The project space in Berlin appears to be bound up with the idea of the periphery – both symbolically and geographically. As a simple illustration of this, in her study Die Berliner Projekträume: ein Standort, French art sociologist Séverine Marguin has mapped the locations of Berlin’s independent art spaces from 1970 to the present day. Sliding the time bar across the 90s, as post-Cold War Berlin itself becomes less and less a periphery and more a center of today’s (somewhat) reunited Europe, you can see the blue pindrops on the map dramatically moving further out from the city’s center and towards its edges. END_OF_DOCUMENT_TOKEN_TO_BE_REPLACED

The Center of Minimum Distance

By info@projectspacefestival-berlin.com | Uncategorized | No Comments
The provisional center of this year’s Project Space Festival is an open green space – a small, isolated paradise at the rear of Theaterhaus Mitte. A babble of speech and song from Berlin’s independent theater scene emanates from the building’s rehearsal rooms, while on the other side of the space, a line of trees provides a screen for the local housing. An overgrown stage caravan, an abandoned circus tent, and tracks in the grass suggest that the space is used only rarely, and even then, on a temporary basis. END_OF_DOCUMENT_TOKEN_TO_BE_REPLACED
9

Another Area
For another era
Are others nearer
Or unable to